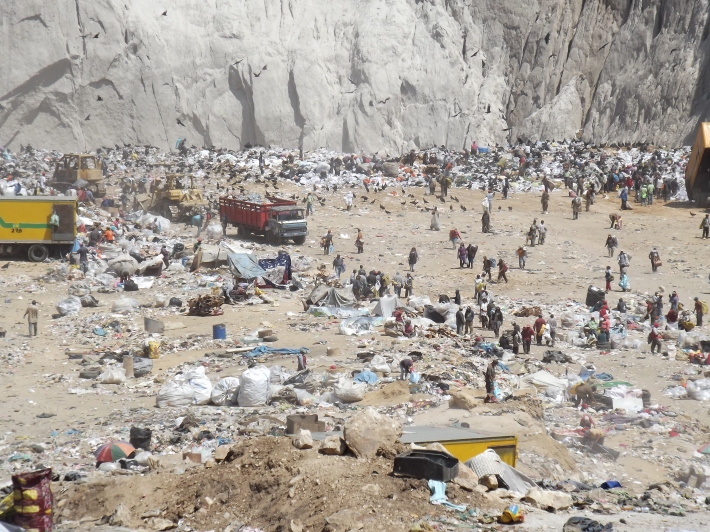 Gehenna was a  smoldering, smoky  valley at the edge of Jerusalem filled with garbage, the refuse that no one needed  or wanted, the rotting,  unclean,  smelly stuff which culture, tradition and the human nose had declared  unwelcome to the point of getting rid of it.

Move forward 2,000 years from the time Jesus described Hell by comparing  it to Gehenna, and we learn that nothing has changed.  Garbage is still hauled away from where we live.  It is still dirty, smelly, wet, and unwelcome.  It still smolders and smokes in a steep canyon  which  year upon year is being filled with all the stuff society no longer wants.  This Gehenna is not in the Middle East; it is in Guatemala City, and it is  still a body-shudder reminder of what Hell is and will be.

I have just spent the last three days in  the Guatemala City dump and an adjacent neighborhood that like a parasite, lives off the dump.  I’ll be here for three more.  Yesterday, at the invitation of one of the foremen of the dump, we were  led on a private tour of Gehenna.  We descended into the pit, really a miles-long canyon which is being filled with all the garbage a city of several million can generate.    Minute after minute, hour after hour, day after day, a steady stream of overburdened trucks descend the dirt road into the pit.  As the trucks near the dumping point, streams of people run to catch up to the trucks, lining up on both sides, fighting to be in position next to the truck so that when it stops and begins to dump, they will be in place to grab the best of the trash as it is extruded.

As the trash falls from the truck, the people lurch into it like in a slow motion swim.  Bare hands, unbooted feet and maskless faces plunge in and begin pushing useless garbage aside in the pursuit of value – valuable things like plastic bottles, sheets of cardboard, bits of metal, glass,  all things which in this macabre world are worth shoving and fighting for.  Occasionally the scavengers pause and take a sip of whatever remains in the bottle they just pulled from the  garbage truck’s excreta.

As the people dig through the garbage, this moist, sour-smelling hell, with ungloved hands , who knows what they will find?  Broken glass? Jagged metal?  Toxic chemicals? Dead animals?  They have created a hierarchy, a pecking order which gives Darwinian preference to some and relegates others to be the scavengers after the scavengers.   Strong young men actually gain access to the trucks prior to the dumping and get the best of the best garbage.  Then come those strong enough and fast enough to get in position and keep up with the rolling trucks prior to the dump site.  Last come the little old ladies, bent over, widowed or abandoned, who pick through what is left, keeping slightly ahead of the bulldozers which level out the mounds of trash and cover it with dirt trucked in from elsewhere.

I looked out over this mass of suffering humanity and thought once again of that little verse in Genesis that says, “So God created human beings in his own image. In the image of God he created them; male and female he created them.”  Really?  So this is what God looks like?  Not cool.  Not cool at all.   As I looked out over this Gehenna,  I really didn’t see the image of God.  I saw a corrupted version of it.  I saw not the beautiful creation of God  but instead an intentional  Satan-designed perversion of it.  I  saw a purposeful design  to make us scorn the Creator – to laugh  at him.  I saw a design geared to dehumanize people to the point where they are of no more value than the garbage they are attempting to gather in order to survive.   Instead of living off the bounty of Eden, as we were meant  to do, these people are living off the filth created by others.   The purpose of an image is to make us think of the original thing.   We are designed to make others think of the magnificence of God when they see us.  However, right now when I see little, bent-over  women piling up  fly-covered  filth in the hope they will get enough money from selling it in order to eat that day,  the loving God of the Bible is about the last thing I think of.  Here in this Gehenna, it is very difficult, if not impossible, to see the beauty of God .

But then something beautiful can happen.  When those of us who used to be as filthy as these scavengers, at least in a moral state of filth if not the physical, are transformed by Jesus, he gives us a love for those who are still unlovely, who are still covered with the filth of dirt and of sin.    He lets us see beyond the what is to the what will be.  He helps us joyfully endure the journey as we work towards the reconciliation of all things to God through the blood of Jesus.    Yes, I do look forward to the future. Even here in this Gehenna.