VULTURES AND A COFFIN

I suppose that if you were to stumble across an open, obviously pre-used coffin, a cemetery would be the most logical place for this to occur; at least it is more likely there than on a sidewalk in the suburbs somewhere.  Well, my wife and I did stumble across an open, obviously pre-used coffin; and yes, it was at the edge of a cemetery.  The dirty, rusted, dented coffin we stumbled upon lay wide open on the ground, beckoning  me nearer for a better look.  It was an irresistible force, luring me closer and closer.  I had to approach, to peer inside  and see what was there.  I was incapable of mustering sufficient disgust and horror to keep myself from taking a peek.

For some reason I approached slowly, timidly, sideways so as to better make my escape.  I have seen death many times before.   Growing up in South America and then living in Mexico for many years had made observing death a relatively  common occurrence.   For a short time during a silly period in my youth I had even owned a human skull, a real one that I had pilfered from a common burial plot in Venezuela.   Yet here I was, a college-educated adult, seldom fearful, not superstitious at all, approaching the open coffin as if there were something which might jump out at me.  Perhaps it is having watched  too many movies where grisly things like zombies leap out at unsuspecting passersby which has influenced my way of seeing things.  I didn’t want to look into the coffin; but I really couldn’t stop myself.

I got to the coffin and looked in.  Nothing jumped up at me, clawing at my face and shrieking like a braking  freight train.    There were no skeleton, no bones, no flattened empty clothing.  There were small piles of moist, almost rust-colored powder littering the silky, stained cloth lining of the coffin.  Was this all that remained of the former occupant?    I was relieved that the coffin was empty, at least of a skeleton or something worse.  My morbid curiosity had been satisfied.

We discovered the coffin last week on a short work trip to Guatemala City.  For several years I have been telling my wife about the garbage dump’s “scenic” overlook from the national cemetery in Guatemala City.   The unkempt, run-down  cemetery is little by little collapsing down the slope into the canyon in which the city dump is located.  A decrepit and spooky cemetery, human scavengers wading waist deep through soggy, sour-smelling garbage, hundreds of circling vultures overhead: not even Stephen King could have come up with a setting  for a horror novel that approximates the living and very real horror of the Guatemala City dump.    Watching people, dogs and vultures competing for scarce resources is true horror, not fictitious entertainment.

TEAM, the mission agency for which I work, partners with a Guatemalan non-profit which serves the people who live in and around the dump and who make their living recycling the garbage of others.    Our Guatemalan partners have started a health clinic, a school, a feeding program, job skills training, a scholarship program enabling some students to go to US colleges, and probably several things I have forgotten.  Their challenge is not so much to get the people out of the dump as it is to get the dump out of the people.  Generations of dump dwellers have evolved  a sub-culture which perceives no future other than the dump. It is  this mindset that our Jesus-following Guatemalan partner agency is fighting and attempting  to eradicate from the minds of the dump dwellers. 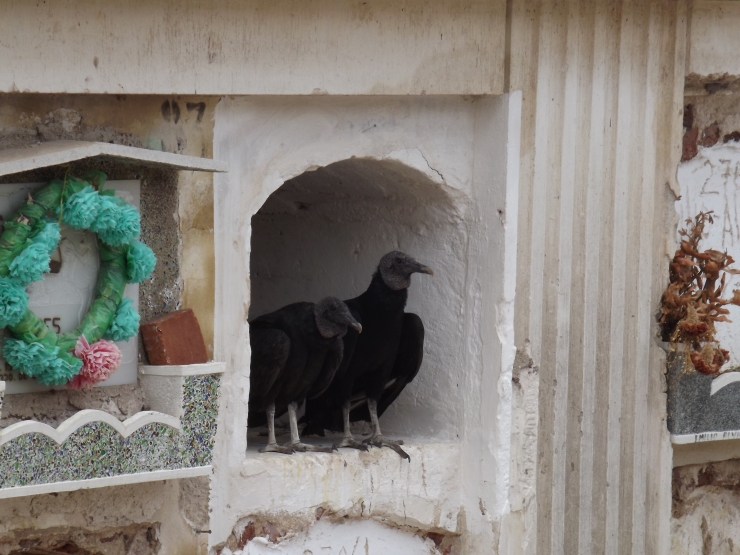 As my wife,  another visiting friend, and I looked at  and into the coffin, we were surrounded by hundreds of black vultures, some circling in the air above us, some standing on the ground around us, and others perching  on top of the hundreds of above ground crypts into which bodies  have been laid, stacked  eight high in  macabre cement “filing cabinets” that surely belong in Count Dracula’s office.  The carrion-eating vultures  stared at us, probably viewing us as human sashimi, still a bit too fresh to eat,  but hoping we would collapse into their next meal.   Two of the vultures found refuge in an open crypt and peered at us from the safety of their empty shelter.

The vultures and the coffin, as disturbing as they were, are but a symptom of something far more sinister. These Halloween worthy images represent death, loneliness, finality, and ultimate futility.    Is this all there is? Is this all we have to look forward to–vultures and becoming  rotted residue in a coffin?   No, there is more than that, much more.   Jesus is the creator of life, and it is life he promises to his followers.  The life he promises is not to be confused with mere conscious physical existence.  The life he offers us uses words like abundance, joy, reconciliation, family, brotherhood, membership in a group, love, and  a wonderful eternity as a few of its descriptors.  Best of all,  Jesus offers a purpose and a reason for living now and forever.